On January 6, 2021 I celebrated my 40th year with Raymond James. While the day began with a huge bouquet of 40 beautiful red roses and champagne arriving from firm management, the day will stand out for the riot that took place in Washington, DC. My intention was to write this Musing on my 40th anniversary while sipping my champagne….but there was way too much happening! The next day, I flew to the Cleveland Clinic in Ohio for Roger’s heart surgery (which was successful) and there was still too much going on with the impeachment, inauguration….and all. 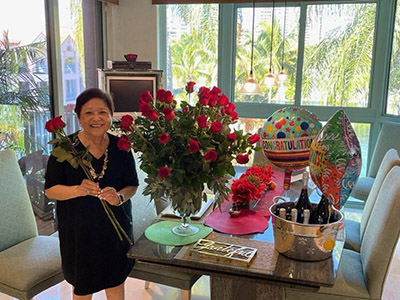 Margaret with 40 roses and bucket of champagne and “grateful” trivet

Finally, I now have time to reflect a bit on my 40 years.

First, I didn’t really plan my career. I was inspired over time. Who we are always begins with our childhood…and my childhood always centered on working in the family grocery store…I began working at age 6. Of course, I felt sorry for myself that I had to work when most kids were playing. However, my knowledge of how to run a business, serve customers, and deal with setbacks all started at age 6. 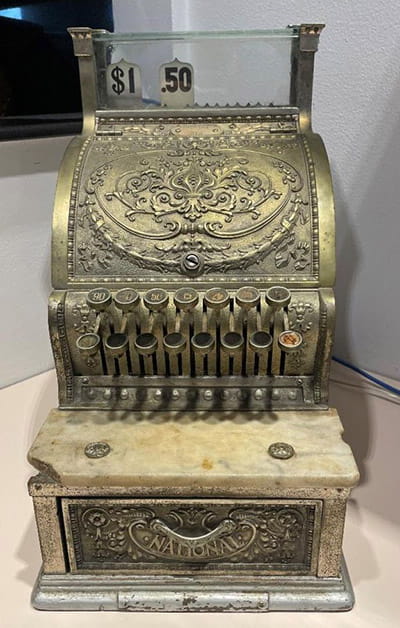 I was part of that generation of women who didn’t think much about careers or ambitions. However, I was also part of the Chinese culture that believed in having an excellent education whether man or woman. My father was a dime-store philosopher who constantly quoted Confucius or practical sayings which, much to my surprise, guided my thinking and philosophy just as much as what I learned in school or college. He didn’t really focus too much on his competitors, but rather the importance of doing just a bit more than anyone else. He really believed lots of little wins makes for a smarter, more successful person in the long run, hence he always preached to work a minute longer or run a second faster than the next person. He was open to new ideas and took risks to try them out. At the same time, he understood how customers made decisions, often to their detriment. I learned what we now call “behavioral finance” from him. He showed me that saving over time, even a little at a time, was simpler and more successful than waiting for the next raise. His philosophy made it easier to accept not being accepted…we just had to be a tiny bit better, tiny bit nicer, tiny bit everything.

My mother was very smart, beautiful, and popular…and the family member that the customers preferred. She taught me the importance of looking good, always smiling, and the value of sisterhood, but she was also very focused on sales and winning. Her generation didn’t have much of a voice…so, with humor and kindness, she helped many women find theirs. She believed in all the Chinese myths and superstitions…and we had to follow them all.

Both of my parents were very social…having fun was as much a priority as having a successful business. Their social network actually was the foundation of their success….teaching each other, financially supporting each other, having fun with each other, and being there for each other created a cohesive union that served all the Chinese families very well. Though all started out as poor immigrants who didn’t speak English, I don’t recall any families who remained poor. And that’s a success.

When I graduated from college, my Dad felt that I should be a stockbroker or sell insurance, believing that either were ideal professions for women. Of course, I was pretty indignant and said I didn’t go to Stanford to be a salesman! In retrospect, my father was more right than I. As I grew older, I learned that Chinese loved buying life insurance! I think because it enabled them to take lots of business risk and still take care of their families…candidly, that’s a guess from my discussions with my father.

Upon reflection, I realize how my father always focused on how to manage risk. My first memory is how he chose to pay his income taxes. Back in those days, there was no withholding and tax day was March 15th. Even though he had the cash, he always borrowed the money to pay his taxes. Being a smart college graduate, I tried to explain to him the cost of money and asked, why he should pay interest on the loan when he had the money which was earning much less? His answer: “I know I will pay the bank back and I’m not sure I will pay myself back…and I like knowing I have the cash.” For example, the cash enabled him to buy in bulk for big discounts. Throughout my career, I have emphasized the importance of having cash when you need it…again it’s really insurance and having a sense of security.

So what inspired me to go into financial planning?

As kids and throughout college and most of my life, I was the “go-to” person for solutions. Rarely did anyone come to me for sympathy. I became known as “let’s ask Margaret.” As a stay-at-home mom, I was always interested on managing our day-to-day finances and searching for ways that our little savings could earn more. I learned to cultivate a relationship with the bank branch manager, even though our savings were pretty meager. He eventually rose to be President of the bank, which became helpful when we began to acquire real estate. However, what really prompted me to become a professional was a call from a stockbroker who wanted to sell me bonds. Interest rates were moving up and my neighbor said you should buy treasuries. At the time, while I knew what a bond was, I didn’t know much about how bonds were traded. When I asked lots of questions, the sto­ckbroker just hung up. I called another stockbroker, again, asking questions, trying to learn…and he hung up too. I never bought any treasuries. And I never forgot how I was treated both by stockbrokers and the branch manager.

A few years later, I read about a new concept called “financial planning” and also attended a Stanford alumni retreat on the subject. I shared my experience and interest in making investing easier with the leader, Claude Rosenberg. He said “Go for it! Financial planning will be the wave of the future…learn it however you can.” Inspired, I quickly found and joined a group of like-minded men and women and became active in the financial planning movement. Many are still good friends to this day. I joined a local study group and found most of the group were employees of Raymond James. I joined Raymond James since there was no other firm that believed in financial planning…most just wanted sales people. Raymond James was a tiny firm and there was no financial planning department. However, Bob James (founder of the firm) was a pioneer and he mentored any of us who were interested. I confess that most of what I know, I learned quickly from Bob. He had a way of making everything simple and easy.

40 years ago, financial planning was not in vogue and basically no one took my focus on delivering “dreams and wishes” seriously. I even had someone say…”you should go back to California.” Now, 40 years later, the concept of delivering dreams and wishes seems to have become a marketing mantra amongst financial firms everywhere. I have so many fun memories of my time as a pioneer and making a difference, both in the profession and with all our clients.

My sincere Thanks to all of you… clients, the Starner team, the many employees and leaders at Raymond James, friends, and my family. At some point after the pandemic….I will have a real celebration!!