We almost didn’t have a Birthday Celebration…

July 4th is here…time to celebrate the nation’s birthday once again! As my long-time readers know, July 4th is a big celebration day in my family. My father was born on July 4th, and remarkably, our oldest granddaughter, Micaela, was born on July 4th the year after my dad died. Also, my daughter, Dana, and her husband, Kenji, were married on July 4th and will be celebrating their 21stanniversary this year. Per recent history, I will join my brother, sisters, many nieces and nephews, cousins and friends at the Cacho’s to feast on barbeque ribs with my dad’s fabulous and famous barbeque sauce. Of course, the original parties were always in Mississippi at my parent’s house. Most of the Chinese in the MS Delta ran grocery stores so all had to work except on Sundays and holidays. It helped that my Dad’s birthday coincided with a national holiday and all could join the party. Literally, our long driveway and front yard would be parked full of cars belonging to families and friends who had traveled far to feast on my dad’s famous barbeque, enjoy the trove of fireworks, and play mahjong. This was a traditional southern barbeque at its best! 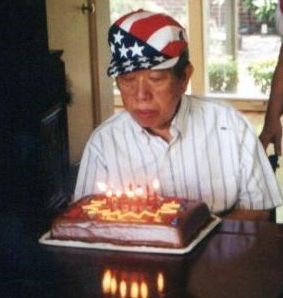 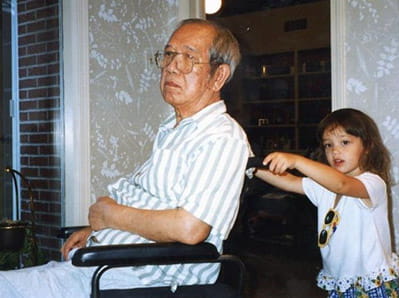 Speaking of Bruce, a Starner Group partner and my son-in-law, he met my family for the first time at one of my dad's July 4thparties. My father James was turning 80 that year, so my daughter Lise convinced her new boyfriend, Bruce, to take planes, trains, and automobiles down to Shelby, MS to meet everyone. My dad had suffered a severe stroke and was pretty much confined to a wheelchair. It is a Chinese tradition to always celebrate birthdays of the elders. So…the party went on with relatives and friends from as far away as Houston…only this time my brothers were the cooks, instead of my Dad. Bruce met the entire family before he had even proposed to Lise (exact quote from Bruce: “I had no idea that many Chinese people with southern accents existed in the world!”). In true Chinese fashion, we put Bruce to work right away; making him hang balloons all over the garage ceiling (he was the only one tall enough to reach!). Well, we must have done something right because he asked Lise to marry him later that year! Truly, the 4th of July is magic for my family! 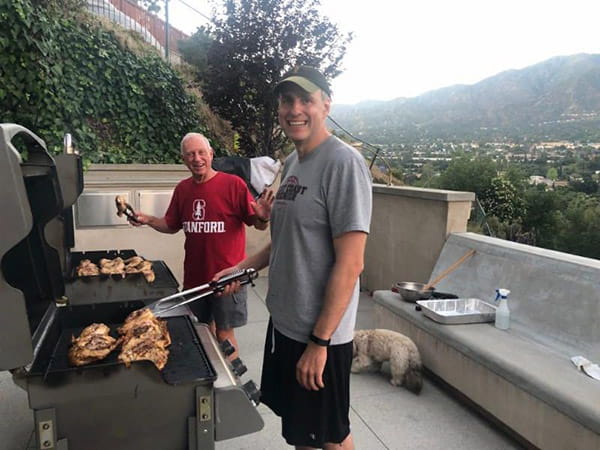 Now, if founding father John Adams had his way, my dad and Micaela would not have had a holiday on which to celebrate their birthdays. Mr. Adams, our second president, believed July 2ndwas America’s birthday. That’s because July 2nd was the date that the colonists held their formal vote to become independent. However, the Continental Congress didn’t formally adopt the Declaration of Independence until July 4th, and hence that day became the official holiday. Rumor has it that John Adams would not accept invitations to July 4th parties in protest.

In the spirit of this patriotic musing, I also wanted to share some more information about how July 4th become a national holiday:

How did the Fourth of July become a national holiday?

For the first 15 or 20 years after the Declaration was written, people didn’t celebrate it much on any date. It was too new and too much else was happening in the young nation. By the 1790s, a time of bitter partisan conflicts, the Declaration had become controversial. One party, the Democratic-Republicans, admired Jefferson and the Declaration. But the other party, the Federalists, thought the Declaration was too French and too anti-British, which went against their current policies.

After the War of 1812, the Federalist party began to come apart and the new parties of the 1820s and 1830s all considered themselves inheritors of Jefferson and the Democratic-Republicans. Printed copies of the Declaration began to circulate again, all with the date July 4, 1776, listed at the top.

The deaths of Thomas Jefferson and John Adams on July 4, 1826, may even have helped to promote the idea of July 4 as an important date to be celebrated.

I hope July 4th finds all of you well, with plenty of time to celebrate the holiday with friends and family. Scott will be celebrating abroad, visiting his son Jesse, who is attending a summer program in Israel.

And in case you missed my last Musing, I was also Awarded the following in 2019!

Any opinions are those of Margaret Starner, and not necessarily those of Raymond James. The information has been obtained from sources considered to be reliable, but we do not guarantee that the foregoing material is accurate or complete.

The Forbes ranking of America's Top Women Wealth Advisors 2019, developed by SHOOK Research, is based on an algorithm of qualitative and quantitative data, rating thousands of wealth advisors with a minimum of seven years of experience and weighing factors like revenue trends, assets under management, compliance records, industry experience and best practices learned through telephone and in-person interviews. Portfolio performance is not a criteria due to varying client objectives and lack of audited data. Research Summary (2019): 29,334 nominations were received, based on thresholds (7,826 women). 10,681 Advisors were invited to complete the online survey. 9,341 Advisors were interviewed by telephone. 1,925 Advisors were interviewed in-person at the Advisors' location. Neither Forbes or SHOOK receive a fee in exchange for rankings. Raymond James is not affiliated with Forbes or Shook Research, LLC. This ranking is not indicative of advisor's future performance, is not an endorsement, and may not be representative of individual clients' experience.

Barron's Top 100 Women Financial Advisors, 2019. Barron's is a registered trademark of Dow Jones & Company, L.P. All rights reserved. The rankings are based on data provided by individual advisors and their firms and include qualitative and quantitative criteria. Data points that relate to quality of practice include professionals with a minimum of 7 years financial services experience, acceptable compliance records (no criminal U4 issues), client retention reports, charitable and philanthropic work, quality of practice, designations held, offering services beyond investments offered including estates and trusts, and more. Financial Advisors are quantitatively rated based on varying types of revenues produced and assets under management by the financial professional, with weightings associated for each. Investment performance is not an explicit component because not all advisors have audited results and because performance figures often are influenced more by clients' risk tolerance than by an advisor's investment picking abilities. The ranking may not be representative of any one client's experience, is not an endorsement, and is not indicative of advisor's future performance. Neither Raymond James nor any of its Financial Advisors pay a fee in exchange for this award/rating. Barron's is not affiliated with Raymond James.

The Forbes ranking of Best-In-State Wealth Advisors 2019, developed by SHOOK Research, is based on an algorithm of qualitative criteria and quantitative data. Those advisors who are considered have a minimum of seven years of experience, and the algorithm weighs factors like revenue trends, AUM, compliance records, industry experience and those who encompass best practices in their practices and approach to working with clients. Portfolio performance is not a criteria due to varying client objectives and lack of audited data. Out of 29,334 advisors nominated by their firms, 3,477 received the award. This ranking is not indicative of an advisor's future performance, is not an endorsement, and may not be representative of an individual client's experience. Neither Raymond James nor any of its financial advisors or RIA firms pay a fee in exchange for this award/rating. Raymond James is not affiliated with Forbes or Shook Research, LLC.

The FT 400 2019 was developed in collaboration with Ignites Research, a subsidiary of the FT that provides specialized content on asset management. To qualify for the list, advisers had to have 10 years of experience and at least $300 million in assets under management (AUM) and no more than 60% of the AUM with institutional clients. The FT reaches out to some of the largest brokerages in the U.S. and asks them to provide a list of advisors who meet the minimum criteria outlined above. These advisors are then invited to apply for the ranking. Only advisors who submit an online application can be considered for the ranking. In 2019, roughly 960 applications were received and 400 were selected to the final list (41.7%). The 400 qualified advisers were then scored on six attributes: AUM, AUM growth rate, compliance record, years of experience, industry certifications, and online accessibility. AUM is the top factor, accounting for roughly 60-70 percent of the applicant's score. Additionally, to provide a diversity of advisors, the FT placed a cap on the number of advisors from any one state that's roughly correlated to the distribution of millionaires across the U.S. The ranking may not be representative of any one client's experience, is not an endorsement, and is not indicative of advisor's future performance. Neither Raymond James nor any of its Financial Advisors pay a fee in exchange for this award/rating. The FT is not affiliated with Raymond James.